The Death and life of the Great American School System, How Testing and Choice are Undermining Education 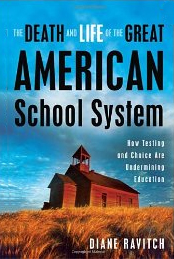 Diane Ravich is a historian of education. Here she explains why she changed her mind about the reforms and enthusiasms which initially caught her up in the push for charter schools, testing and No Child Left Behind.  As a member of the Education Departments of both Bush Presidents she worked to achieve progress towards strong standards for curriculum and strong teaching throughout the system.  During the decade from 2000 to 2009 she “grew increasingly disaffected from both the choice movement and the accountability movement.”  She “concluded that curriculum and instruction were far more important….”  Chapter by chapter she presents the evidence that led her to this changed perspective.  Charter schools are not doing what they promised.  School Districts are not achieving the results that watered-down tests results pretend.  Testing is not the path to accountability that was hoped.  Business men and billionaires jump in to fix schools without any evidence that their approaches are effective.  And saddest of all, the many pressures to reform “Now!” are undermining teaching and the teachers were being blamed for the failures.  Diane Ravich has now become an advocate for teachers and for the public school system she fears may be lost. Her book is an important clarification in the current painful debates.

Was this article helpful?