Two-year old Quami entered our classroom with fear and doubt. It was his first time in child care. His mother was pregnant. Father was in jail. He came from a huge extended family. His social skills were disruptive. His language skills were still undeveloped, even for a bilingual toddler. Many of his English words were swear words he used at nap. He was full of energy. .. Lots of it. He loved to wrestle. The teachers thought it was because he was around lots of cousins and older boys. In the morning he would wrestle anyone. He loved pushing and running games. In contrast to other children who were sad and reluctant to leave their parents, he was eager to start his day with a tempest of misplaced energy. At first, as one of his teachers, I just wanted to get him out of the classroom environment for a little while. I thought he might hurt the younger kids and the baby. He liked the baby but would grab her by the neck if I turned my back for a second.

So, he went outside with me to get fresh air and provide relief to the other teacher. I had him take out the push toys and help unravel the hose and drag it out to the garden boxes. I would have him water the plants. I was a little nervous of what his response might be at first. But I made him my helper, and each morning, he and I would go out and set up the playground. We worked together much of the time. He would help me a little and then run around for a few minutes. He watched as I watered the plants in the garden. Early on he wanted to pull up the sunflowers. But soon they grew taller than him. The lettuce became more visible and he began watering it each day. He eventually got gentler with the plants. 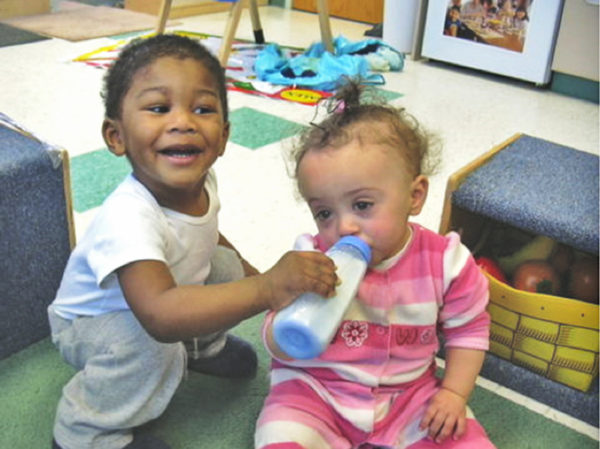 We showed him how to touch and play with the baby- “gentle like this!” – holding his hand against the baby’s hand. Did he learn to regulate between frenzy to calm, did we see a change? As his Mom’s belly got bigger and he got used to our daily routine of watering the plants and playing with the baby, he seemed to be calmer. He still ran around and chased and rolled in the grass but he seemed less chaotic and ready for his role of big brother. Has he developed empathy, compassion? I’m not sure. He is at the beginning of a long story, one that I hope leads to empathy and compassion.

The above story from Craig Simpson tells how one teacher chose to develop a child’s instincts for caring and empathy even though the behaviors of the child masked these dispositions. When teachers trust that children are born with social consciousness, then they promote practices that help children develop ways to exhibit empathy, compassion and respect. Just as children need the opportunity to stretch, crawl, sit, and stand in order to walk, children need the opportunity to practice caring, empathy and compassion in child ways so they can respond maturely as adults.

Was this article helpful?